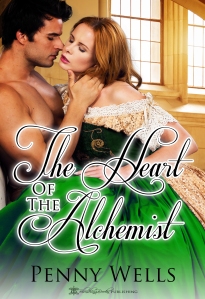 It’s book release day for my new pen name, Penny Wells! My first romance novel, “The Heart of the Alchemist” is now out!

When the love of her life dumps her, Katie spends three years living with a broken heart. Seeing him with his new fiancé prompts her to make some changes, but before she can, Katie is torn abruptly from twenty-first century Chicago. Landing in Elizabethan England, she finds herself in a room with a handsome alchemist named Robert.

Unable to send her home, Lord Robert assumes the role of her guardian and helps her learn how to live in 1566 London. Robert’s father, the spymaster to Queen Elizabeth, sees the value in Katie’s knowledge from the future and allows her to come to court. Plunged into a world of scandals and secrets she doesn’t understand, Katie risks her life to earn Lord Robert’s trust.

As a man with questionable intent begins to pursue her, stirring Robert to jealousy, Katie discovers she may feel more for Robert than she thought. Being a woman in the sixteenth century where she may be spanked, married off, or locked away is fraught with perils. But has Katie found love despite their four hundred years of differences?

You can find your copy of “The Heart of the Alchemist” at:
Amazon
Blushing Books

For more information and to read the first chapter, please visit www.writerpennywells.com