You may remember from a Patreon post that I have been working on launching another project under a pen name. Well, the time has come to share!

I have been working on writing books for women (men, you can still read them if you like!) and will be publishing them under the pen name Penny Zambeele. Most notably, I will be sharing entire books for free on a platform called Wattpad.

If you haven’t heard of Wattpad, it’s a free online community for writers and readers. Writers post their books, stories, and works in chapter installments, and readers can vote for their favorite ones, leave comments, and share. Even better: you don’t have to sign up on Wattpad to read the stories. If you don’t fancy joining Wattpad, you can always follow along on my Penny Facebook page to look for updates and read straight from there. (However, signing up takes two seconds and the app is super great, so it’s worth it if you really enjoy reading.)

My first Penny Zambeele Wattpad story is called “Of Evergreen & Mist”. Based on Scottish and Irish folklore, the story revolves around a selkie-mermaid couple named Ula and Calder. Here’s my Wattpad story description:

“Can love survive when two people are ripped apart?

Not just any mermaids, Calder and Ula are selkies: mermaids that need the skin of a seal to live at sea, and can come ashore in human form every nine days. In the medieval Scottish highlands, the mermaid couple is happily in love until Ula’s sealskin is stolen by a human man. According to tradition, he is now entitled to take her as his wife.

Suddenly split from each other, Ula and Calder are forced into a heartbreaking separation they never imagined. Stuck on opposite sides of the shore – Ula stranded on land and Calder forced to stay in the water – they must carry on apart from each other. Their only hope is that Ula can one day find her sealskin and return to the water. But as the time passes and their lives transform, can their love remain?

Told from the perspectives of both Calder and Ula, “Of Evergreen & Mist” is a story of love, magic, and longing.”

The first chapter is available now at www.wattpad.com/user/pennyzambeele 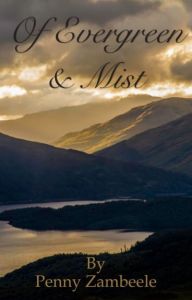