Marriage – indeed, living with another human being – involves so much team work. You have to work together and be patient with one another. You must communicate and stay open-minded.

I always heard men complain of how women expect them to be mind readers.
I always thought it was silly. I certainly never expected a man to read my mind.

A couple of weeks ago, I had a craving for one of my new favorite foods.
(It’s all S’s fault – he introduced me to it in the first place.)

So I texted him and said, “I’m craving pizza.”
(Now when I say ‘pizza’, I don’t mean pizza. I mean this delicious thing I’ve discovered known as pesto pizza. It is glorious.)

S called me on his work break: “Do you want me to pick up your pizza on my way home?”

So S came home that night, and I still wanted pizza.
I mean, how did he not intuitively know that I wanted the pizza, and why did he even have to ask if I had just told him I was craving it?

Poor S.
He bought me pizza the very next night.

Luckily, this situation can be classified as ‘immediately funny’, and it has become something frequently referenced.
For example:

Another of S and my favorite dinners is spaghetti. S puts fresh herbs from our window garden into the sauce. We grate fresh asiago cheese over the noodles. Red wine is always poured. To top it off, we usually eat it by candlelight (because we’re poor and can’t afford fancy dates and candles are cheap and romantic).

Well, the other night, we had fixed spaghetti for dinner. We sat down to eat it, and S noticed the candles weren’t lit.

S: “Do you want me to light the candles?”

(He lit the candles.)

Every so often, though, we seem to be on the same page, inexplicably.

The day I decided I wanted Everything-But-The-Kitchen-Sink Bars, Stephen brought home the chocolate chip cookie dough – and I hadn’t said a word to him about the dessert.

The other day, I got the dishes done (we don’t have a dishwasher), but I wanted to use cleaner in the sinks and I didn’t have time. I left the house. When I came back, S had deep-cleaned every surface of the kitchen. Without me mentioning anything.

My mom calls it ‘marital telepathy’ when the stars align and we’ve read each others’ minds. 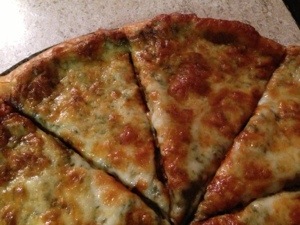